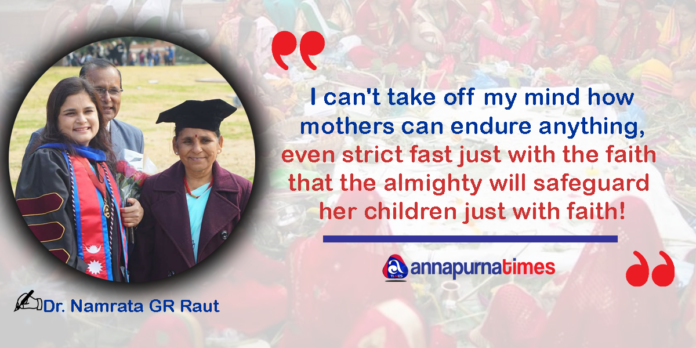 Mother: a figure defined for sacrifice, love, devotion, and emotions. But never underestimate the fierce, warrior, trailblazer, and protector in her. I just accidentally watched a clip and a lady said: “jitiya is observed by moms who have a son”. Then also read on the comment section of so many social media about the same thing, “jitiya is done only for son”, “the prasad of jitiya should be consumed only by son” etc., etc. And it would be a lie to say that I am reading this for the first time. Oh, and let me hint at one more thing, these men and women both want to give us a false impression of how they are the one who talks about equality. Now that’s the joke! Then I don’t want to say anything to them as that shows their primitive mindset. Let me focus on my learning and teaching which is still on. Jitiya or Jivitputrika has been observed in my family for generations. I remember my Maa saying how her great-grandma celebrated jitiya although she had just a daughter…..oopsie! There she is breaking the patriarchy right then.

Jivitputrika also known as Jitiya is celebrated from the seventh to ninth day in Krishna paksha of the lunar calendar in the month of Ashwin. This is celebrated in the southern region of Nepal by Maithili, Tharu, Bhojpuri, and Awadhi-speaking people. Jitiya is the strict fast done without water by the mother for the well-being of their children with faith. This starts on the seventh lunar day or Saptami of Ashwin and concludes on the ninth day or Navami of the month by offering prayers to Jitwahan, an incarnation of Lord Vishnu (God of creator) and Bhagwati (Goddess of protection/strength/motherhood/destruction/war).

I have a soft corner for Sanatan-dharma and Buddhism as I was raised in the household practicing that but then I don’t abide by all the rules that do not come from the practicing saint itself but rather from the few men in the obsolete era who never thought women as equal. I am glad those thoughts are changing gradually. Then there are some facts, or should I say some learnings that I have done or taught while raising about customs/culture/Sanatan-dharma/life of Buddha that leave me in awe! For example, in jitiya, the one observing the fast gives their respect to the ancestral mother figures by offering the prasad from the last 3-6 generations. And I absolutely can’t express how magnificent way of showing tribute is this, because in any celebration usually, the male figures are the priority. As I mentioned in the previous article on jitiya, where the first day is to eat, also known as nahai-khai and the second is observed as a strict fast. Some people might get upset that I am advocating about fast, but I am not!! If someone is not feeling well or can’t do it, no one should force it because, at the end of the day, it’s always about choice.

Mithila/awadhi/tharu and most of southern Nepal always raise us with the sense of having five kinds of mother in your life. So, it is very well inculcated in us the importance of a mother figure in our lives. First, who gives birth, second who raises you, third who invests in you- teaches you, fourth is your mother-in-law, and fifth is your elder sibling (sister) or wife of your elder brother.

I have had my first prasad of Jitiya from mithu di who is not my mom but is someone who has taught me how teaching works, Aprajita Ma’am who always cheers me up to be unapologetically fierce for righteous acts, and Jean to be my advisor for life on the professional and personal font. I can’t even ignore how Nanumaiya aunty always keeps me in her prayers.

My mommy observes Jitiya and let me be loud and clear that she has no son but always has been a warrior to shower courage on the three of us and shatter the glass ceiling of discrimination between son and daughter. So how can I ignore all the emotions that these women have invested in me?

Again, I am not advocating for a strict fast, but I can’t even take off my mind how these mothers can endure anything, even strict fast just with the faith that the almighty will safeguard her children (not only her son!), just with faith! I am a neuroscientist; I believe in facts but I would not dare to fight with anyone’s FAITH! This is an emotional connection, as we tend to live in the materialistic world where we want to celebrate everything with short-lived joy/alcohol/smoking/influences etc.

There is no judging but if we invest in the joy that we receive from our loved ones is far more spiritual and after all, we all thrive on good vibes.

So, I want to pay respect to all the mothers, as no one on this planet would love you more than your parents, but exceptions are always there 😊. So, I will take a minute to wish a very happy jivitputrika to all the moms by blood or by heart who never misses a gazillion prayers for their children in every breath she takes in. And no, you don’t have to observe fast to prove it.

Chhath: an ancient Vedic festival describing the importance of the sun